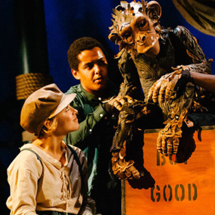 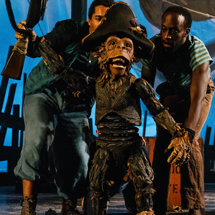 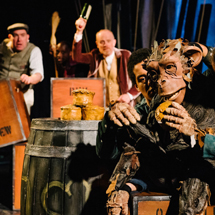 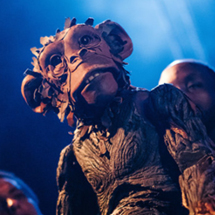 “Highly skilful, slick and unsettling. The monkey naturally becomes the star of the show. The puppetry is deft and detailed.”
The Stage

‘The monkey is oddly, heartbreakingly human; it is the humans who behave like animals.”
The Guardian

“I admit to having a tear in my eye and lump in my throat.”
Hartlepool Mail

“A sparkling production, combining the fascination of a myth and a strong message for the present. Gyre & Gimble show that puppetry is an evocative way to open minds no matter the age.”
Disclaimer Magazine

Written by Carl Grose
Inspired by the urban myth

In 1815, during the Napoleonic Wars, a French warship is wrecked off the coast of Hartlepool. Only a brave young cabin girl and the ship’s mascot, a chimpanzee in French naval uniform, survive and make it to shore. But the townsfolk, having never seen a real Frenchman before, mistake the costumed ape for a French spy, condemning him to a life-or-death trial. What will the verdict be – and can the cabin girl, along with the local children, save the day?

The legend of The Hartlepool Monkey has survived the test of time, capturing the imaginations of people of all ages for over 200 years, and landing here, on the shores of the 21st century, more relevant than ever. A boisterous crew uses thrilling stagecraft, spirited sea shanties and a mischievous chimpanzee puppet to tell this timely tale that explores xenophobia – its causes and consequences –  whilst celebrating mankind’s ability to overcome prejudice.

For adults and children, families and schools. Ages 10+