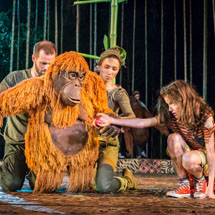 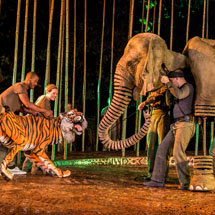 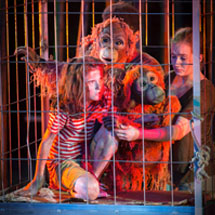 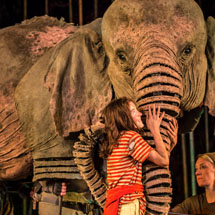 “Genuine wonder…remarkable by its inventive, evocative staging.”
The Times

“The highlight of this show is the magnificent puppets…things of never-ending beauty.”
Evening Standard

“The animals are so eye-catchingly brought to life. All remarkably lifelike and immensely articulate.”
Financial Times

“This out-does both War Horse and The Lion King in the puppetry stakes. Animal Magic.”
The Guardian

“The puppetry is exquisite, with full-sized animals manipulated so they seem to breathe with documentary life.”
Time Out

For Will, going to Indonesia isn’t just another holiday with mum. It’s a new start, and the chance to ride an elephant called Oona. But then the tsunami hit. Charging deep into the jungle, Oona escapes the beach with her young rider desperately clinging on. Miles from civilisation, at first there’s wonder, discovery and adventures amongst the orangutans. But, as thoughts turn to mum left behind on the beach, tigers prowl, hunters attack, and Will must now learn to survive the rainforest.

Reimagined for Regent’s Park Open Air theatre, Gyre & Gimble developed the existing puppetry from the original Chichester production and created additional animals and elements to bring this epic jungle adventure to life. With a cast of 40 performers and puppeteers this was the largest-scale production ever to be presented at the Open Air Theatre. A story of love, loss, loyalty and of living for the moment.