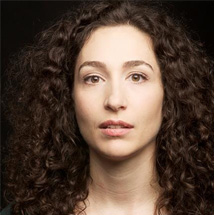 How would you describe the current project you’re undertaking?
It’s a puppet driven response to Max Richter’s recomposition of Vivaldi’s The Four Seasons. I haven’t seen or done anything like it before, so it feels like quite untrodden ground. It’s always hard to tell halfway through the process, but to me it feels emotionally rich and beautiful, and I can’t wait to get into the space with the musicians and watch the pieces come together.

What are your roles and responsibilities in the show?
It’s a proper ensemble show (like all of my favourite ones to perform), so that means doing everything from moving a table to puppeteering the head of one of the protagonists.

Have you worked with Gyre & Gimble before?
I met Finn and Toby on War Horse, and after the bonding experience of being in the trenches covered in mud together, it was a no brainer when they asked me to get involved with their new company. I was in The Elephantom (puppeteering the trunk of the elephant, and playing an overworked school teacher), but sadly missed out on the chance to be in Running Wild as I’d just given birth to my son a few months earlier.

What training have you had, and in what skills?
I trained at Lecoq in Paris, so my focus has always been on ensemble theatre-making, physical, and visual theatre. I’ve also trained in straight acting – I went to LAMDA after university to do one of their acting courses, and a lot of apparently random skills that I thought I was just doing for fun have ended up being incredibly useful in my work life, including aerial, harness work, acroyoga, and yoga teacher training.

How did you find your way into puppetry?
I was lucky enough to be offered a dream role just after leaving Lecoq, in Kneehigh’s Brief Encounter (it’s coming back this year, so if you haven’t ever seen it, really do.) There were two puppets in that, and I had to perform one of them as part of my ensemble track. But as it was a handover role, I did a lot of figuring out how it worked on the job. After that I went on to War Horse, and had an incredibly rich two weeks of ‘puppet school’ before rehearsals began, which is where I really caught the puppet bug.

What previous performing experience have you had?
I’ve been lucky enough to move between worlds – acting (particularly motion capture acting) and puppetry, and work on stage and in film. It’s been an incredible ride so far. The highlights in film have been getting to work on Gravity -as a puppeteer and performance capture actress- with Alfonso Cuaron, and working with Steven Spielberg on Ready Player One. I found them both to be such gentlemen, and really astute and thoughtful directors.
In theatre there are just too many good experiences to count, as I’ve met such brilliant people on every job. I always feel like I’m sneaking into these august institutions (the National Theatre, Royal Opera House, RSC, Shakespeare’s Globe) through the back door though, as we’re always the renegades in the basement doing Blue Peter style knock ups with cardboard and messing about with puppets.

What are the joys and challenges of bringing a puppet to life?
What I love about puppetry is that it’s a mix of the best bits about acting -clarity of thought and emotion, finding your way through a narrative in a way that makes sense to you and the audience- and something totally other. It reminds me most of film acting actually. There’s a really strong technical component, but that has to be tied in with a lot of heart and be as full of detail and truth as you can make it.
The biggest joy is the connection you have with the other people on the puppet – or if it’s just you on the puppet, the relationship between the puppet and the rest of its world. It can be pretty spectacular when you get into that mind meld place of just being able to play the part, because you know that you’re all feeling the same things and supporting each other. I sometimes get the impression that ‘straight acting’ can, in some cases, be a lonely path, but puppetry is intrinsically a team effort. You can’t go it alone, and I wouldn’t want to, because it really feels like I’ve found my people, and they’re such a glorious bunch of individuals.

What career ambitions do you have for the future?
I’ve always from the very beginning had a mantra, which is ‘good work with good people.’ I should really get it tattooed on me. It’s something I ask myself if I’m ever in doubt about whether to do a job. It just really helps to clarify why you’re doing stuff, and hopefully gets around some of the pitfalls and lures of the biz.
Having said that I’d give my right arm to work with Guillermo del Toro, particularly if Doug Jones was also in the movie. So that’s right up there on the bucket list. I ticked off one of my other big ones, which was to work with Andy Serkis, also a total hero of mine, and Terry Notary – that was just as amazing an experience as I could have hoped for. So there’s really not many to go before I can die totally happy.

As a child, what did you want to be when you grew up?
I think I remember a phase of wanting to be an archeologist, and also a deep sea diver. Maybe at the same time. I thought they were mutually exclusive, but I recently met someone who studied marine archaeology AND was an opera singer and dancer, which I think makes her the coolest person alive.

Which five people, living or dead, would you invite to a dinner party?
This is always such a tricky one, and my answers probably change yearly. To be honest, I’m a little bit literal about this one, as the idea of inviting a dead person to my dinner party kind of freaks me out. So I’m going to go all living, and say:
1. Guillermo del Toro and Doug Jones (see above. I’m treating them as a package deal)
2. Adam Pleeth, a spectacularly talented composer, who has written the music for two Gyre & Gimble shows (The Elephantom and The Hartlepool Monkey) and who happens to be my husband. He also knows that I’ve put him second (third?) on my invite list and he’s cool with it, because he’s that kind of guy.
3. Aurelia Thierree because she’s a completely mesmerising performer, and I’d want to get some top tips from her. And ask her to introduce me to her brother James too, because he’s also awesome.
4. The entire cast of The West Wing (yes, I know that’s probably cheating), because it’s the most perfect piece of TV ever aired, with the seat next to me being reserved for Alison Janney -but I also reserve the right to occasionally call her CJ Cregg and ask her to perform the Jackal (that’s one for all the WW nerds out there).
5. RuPaul because as well as being a shrewd business person, she is hilarious and clearly unbelievably intelligent, and why wouldn’t you want someone like that at your party?

What inspires you?
Bravery. Watching performances which feel like skydiving. Someone throwing themselves out of a plane on stage. Bertie Carvel as Miss Trunchbull in Matilda was one of those, also Lucy Ellinson in Grounded, and Tristan Sturrock does it in every show he’s in. Artistically there are a couple of companies who are gutsy enough to keep changing it up, and trust that their work will have the quality that keeps the audience coming back. Fevered Sleep has it in spades, as do Theatre Ad Infinitum and Gyre & Gimble.

What makes a great piece of theatre?
This is a tricky one, because it’s difficult to distil what makes a show come together and be magical. There are so many shows where the ingredients are all there, but they don’t form a satisfying whole and it’s hard to work out why. If I had to guess, I’d say that my favourite shows are stories you feel like someone just had to tell. That are itching to get out, and that end up on the stage with that drive and that passion still in them. And it kind of doesn’t matter who in the team that’s coming from – the writer, the director, an actor, the stage manager. As long as someone is head over heels fully invested, that brings an energy to the piece that you feel when you walk in. That and good dramaturgy. It’s a role that’s often a little underestimated, but structure and build and rhythm always make or break a show or a film.

Vivaldi’s The Four Seasons: A Reimagining is playing in the Wanamaker Playhouse at Shakespeare’s Globe, London from 09 March – 21 April. More information and ticket booking can be found HERE